Have you bought teff, but you don’t know how to cook it? Well, you’re in the right place.

By reading this article and clicking on the last link of the index, I’ll show you how to cook some delicious vegan crepes made with teff flour.

But first, I’d like to tell you about this cereal (or better, this cereal-like) which is similar to millet but smaller.

In this first part of the article, I’ll tell you about…

After that, I’ll tell you about the recipe used to cook some good vegan and gluten free crepes made with teff flour.

So, without further ado, let’s move on to the index.

ETHIOPIA AND ERITREA, TWO COUNTRIES IN CONFLICT WHICH STARTED TO KEEP THE PEACE

The main countries where teff is grown are Ethiopia and Eritrea, two countries of East Africa bordering Somali and Sudan.

Eritrea, in contrast to Ethiopia, overlooks the sea and this is not a small thing.

Eritrean coast, particularly, extends for about a thousand miles and the southeast extreme part borders the strait of Bab el-Mandeb which connects the Red Sea to the Gulf of Aden.

These two countries, namely Eritrea and Ethiopia, are known for a civil war which lasted more than 20 years.

A war that comes from the period in which both of the countries represented the legacy of the Italian colonialism.

Italy lost this legacy by being defeated during the second world war.

The British helped Eritreans to chase Mussolini’s forces away, so that they could dominate their own lands.

However, in 1949 the United Nations decided to also break free from the English nomination.

During that period the two countries started to have their first controversies… And yes, how could we not agree with them!

What the eritreans did not like was the fact that their country was being sold to the sovereignty of Ethiopia.

Eritrean people’s reaction was immediate. And it was so violent that it opened a war which today is remembered as brutal and violent.

Both of the sides can’t easily forget about these features.

However, their relationship is becoming more and more peaceful. The borders have been re-opened and they let relatives and friends meet and hold each other once again.

There is a beautiful sentence that the ethiopian prime minister Abiy Ahmed Alì told about the borders between these two countries:

[bctt tweet=”“There are no borders between Ethiopia and Eritrea, since a bridge of love destroyed them”” username=”WildNatureSoul”]

Today there is not financial security in these countries yet.

However, they surely took the path of sharing and self-sustainment which can only bode well.

Just like what happens between two people, the cultural aspects people have in common bring two populations together.

[bctt tweet=”It doesn’t matter if it’s a cooking culture or not. We should only prefer the exchange and the pacific confrontation.” username=”WildNatureSoul”]

In this respect, teff is for sure one of the aspects of cooking culture which brings these two countries together, since they made and they make it the history.

When you’re living in poverty, it goes without saying that costs must be reduced.

The teff plant has important properties which are very popular among these two countries who lives near the equator.

Among them, there is the ability of withstanding both drought and heavy rainfall which are typical of the rainy season taking place from April to September.

Another very precious feature which makes of this cereal-like an element of fundamental importance for poor countries like Ethiopia and Eritrea is the fact that you can sow it in small quantities but in large fields.

Moreover, an aspect that intrigued me is the fact that no parts of this plant are thrown away.

That is why they use the grain to make different kinds of products, such as Injera (a typical soft bread which is naturally fermented), porridge and local drinks, while the straw is used for the animal feed and as a building material.

So, if you think about it, it’s not difficult to understand why this plant is precious, since it’s 360° useful.

This plant is made of thin steams and shallow roots. Its flowers produce white, red-brown or mixed coloured seeds.

These seeds are the smallest among cereals and cereals-like. Their dimensions reach 1 mm in diameter and that’s why it’s nearly impossible to remove the external part of the grain.

This ensures the conservation of the bran and of the germ and this is a positive aspect. Not by chance you can find the whole grain version on the market which provides you with a very good fiber intake.

When I saw some teff  for the first time, I was in the biological unit of a supermarket.

I was looking in the stacks for another kind of flour which is now an integral part of my diet, namely tapioca flour.

It’s tropical food. It’s a type of starch which comes from manioc, namely a typical sour stem of East Africa and South America.

You can use tapioca as a thickener for sauces and sweets. However, I’ll talk about it through another article later! I promise!

Let’s get back to teff…

… surprisingly, that day, I found teff flour and teff grain as well.

I remember thinking that name was not new (…teff…) and I already knew about some of its wonderful nutritional properties. So, out of curiosity, I decided to buy it.

[bctt tweet=”Teff, being a low-calories type of food, is recommended for those who would like to lose some weight.” username=”WildNatureSoul”]

Because of its wonderful properties, it is unfortunately expensive (half of a kilo of flour or in grains are around 6 euros).

However, this should not drag your attention from an excellent product of nature, in fact it should make you think “there should be a reason for it being so expensive…“, right?!

In short, the more I learnt about its origins and qualities, the more I thought that cereal would have become an integral part of my diet with a front row seat on the shelf of gluten-free cereals.

However I didn’t know how to use it, so I thought to myself …

“What if I try to make some crêpes?”

UTENSILS ~ For this course you’ll need: 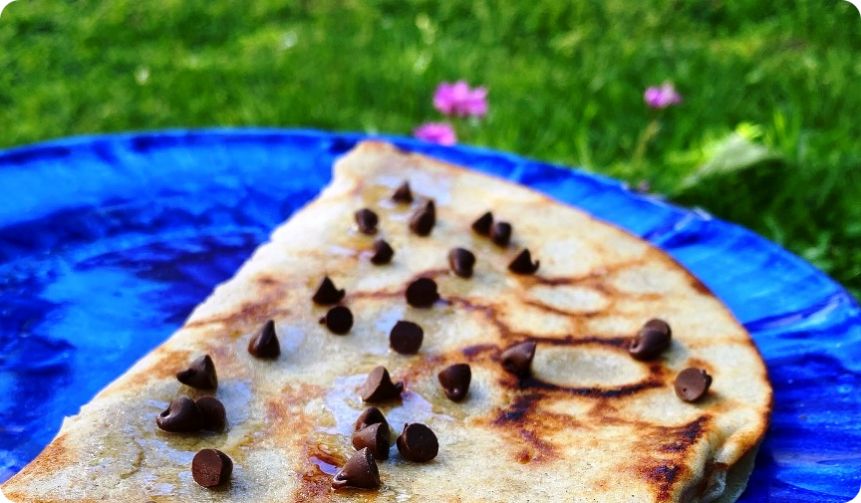 STEP 1 – A bowl for the mixture. Let’s pour teff flour, a pinch of salt and curcuma inside the bowl and let’s stir.

After that, let’s add evo oil, maple syrup and – little by little – the vegetal milk while stirring by using the wire whisk to avoid lumps.

STEP 2 – Non-stick pan. Let’s moisten the pan with a napkin soaked in oil and let’s put the pan towards the medium high flame. Wait for 1 minute for it to warm up.

Now make a crêpe by pouring part of the mixture at the centre of the pan using a ladle.

Let’s spin the pan to roll the mixture out and let it cook for 1 minute for each side.

Do not forget to moisten the pan with the soaked napkin everytime you start making another crêpe.

Once they’re ready, put it in a plate.

STEP 3 – Decoration. now have some fun. I didn’t want to give myself a hard time so I decided to decorate my crêpes with agave juice and biological bitter chocolate chips.

Tip: if you’d like to stress the taste, you can add ½ of a vanilla pod or (if you decide to use cacao) some cinnamon!

Tip n. 2: avoid those combinations which could make your digestion difficult. For example it is not recommended to decorate your crêpes with fruits, since the combinations of cereals and fruits (even worse if that’s sour fruits) could cause fermentation and acidity on a gastric level.

In general, we should follow the principle which says to practice a healthy cooking with a few and simple combinations.

Et voilà, crêpes are ready to be served!

And remember, if you try the recipe, give me a feedback by writing a comment below!

OTHER RECIPES YOU SHOULD TRY

If you’d like to try some new, bio and healthy recipes, I suggest you take a look to the following ones:

If you don’t know how to seize opportunities because you live like an eternal procrastinator, you should know these might...

If you can think of…

Welcome to my blog! In this article – titled If you can think of it, you can do it –...

The mask as a symbol…

The mask symbol of submission and ignorance The fact that masks are bad and do not protect us from COVID-19...

Colette: the beginning of a…

In this article, I’ll talk about Colette (the protagonist of the article Healthy relationships and health: Colette’s history) and her...

Have you bought teff, but you don’t know how to cook it? Well, you’re in the right place. By...