It’s so easy to understand why having healthy relationships can help you in improving your health and finding your wellness.

We have to assume that each of us is like a sponge, namely something that is able and has the tendency to absorb things, events and situations that surround it.

With this premise, don’t you think that it would be wiser of you to always look for an ideal environment, ideal acquaintances and a job which incentives you and gives you the chance to grow up in tune with yourself? If your answer is ‘Obviously yes, but it’s not easy!’ or ‘I’d really love to, but I don’t know how to do it’, let Colette’s history inspire you.

I’ll tell you in short:

Colette, our protagonist, is walking by the streets of Paris. All of a sudden, she felt pleasantly impressed by the lively and sparkling mood given by the music and the shows performed by many street performers that follow one another from square to square, from alley to alley. 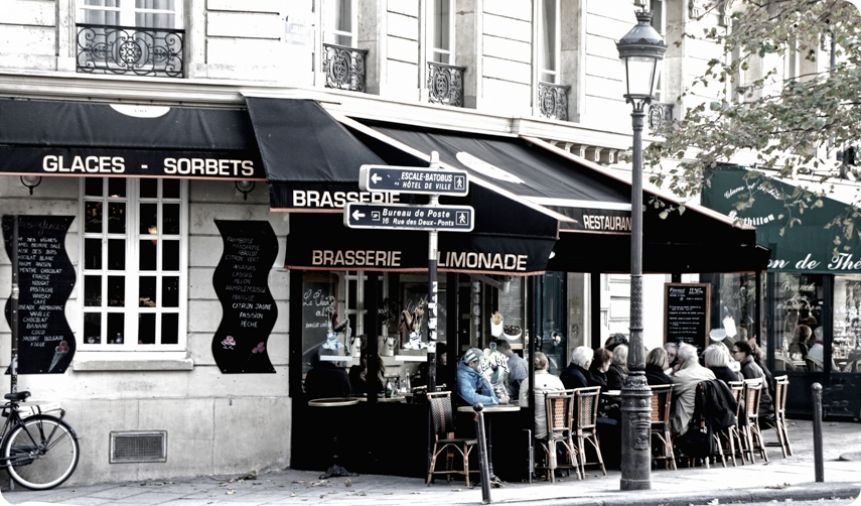 Colette was enchanted because of a group of musicians’ songs proposed on the corner of Boulevard Saint-Germain and the Rue Guillaume Apollinaire, right in front of the Saint-Germain-des-Prés abbey.

So she decided to stop and listen to them. She felt so attracted and involved that she did not notice the minutes slipping away.

Shortly thereafter, she noticed that the group of nice musicians was playing right next a lovely and historical Cafe of Paris. This, obviously added a note of colour to the moment that was already been sweetened by that welcoming and elegant music.

All of a sudden, a waiter got close to her. He kindly asked if she wanted to sit at one of the outdoor tables, being conscious of the fact that she would have problably liked to sip a fine drink while keeping on listening to the music.

After thinking about it, she smiled. She nodded her head and took a sit.

In the meanwhile, a nice man who noticed her, got closer and offered her a small rose which he picked from the garden right in front of the Cafe. While not knowing him, Colette decided to trust him and let him go on with his courtship.

While talking to him, she noticed he was a kind person and that the gesture of giving a small rose to her meant that there was a sincere appreciation behind. The evening went on between a fine glass of wine, good music and sweet words said in the right moment.

When she decided it was time to go, Colette said goodbye to Rémy (that’s the name of the man who offered a rose to her). She thanked him for having entertained her with his stories and for having made her smile several times. He reciprocated and she left.

Colette started walking on her way to the hotel. She stopped for a moment at the hall and she started to notice all the wonderful details that were making without a doubt that hotel look like the nicest of the district.

She accurately chose it a few weeks before, when she was planning her trip to Paris. After looking at its pictures and reading the reviews, she felt inspired enough to be sure to book a room.

Unfortunately, the following morning Colette had to leave and come back to her daily routine. She was not so happy. She spent a wonderful weekend in the romantic Paris and now was time to start a new work week.

However, while looking out the window of the plane already in flight, she noticed she had a small scroll closed with a bordeaux-colored lace in her purse.

She smiled to herself, without opening it. A happy thought managed to make her smile again. She unrolled the small scroll and noticed there was a telephone number on one side and the drawing of a rose on the other with an inscription …

Colette was so happy that her routine did not make her sad. In that moment she realised that meeting Rémy meant making a gloomy day, just like those in the city where the plane was going to land, into a rainbow-colored one.

Just so we don’t let the story hang on a thread, I’ll tell you what happened next.

Once her plane landed, Colette took a taxi and in no time she got home. Well, her home was not so far from the airport and that was not a coincidence for a woman who loves to travel and who gets on a plane and leave for different destinantions in the world every week other.

However, the meeting with Rémy changed her. From then on, she stopped travelling so often, that was what she did to escape her monotonous life and the usual haunts. She used to travel whenever she felt it was the right moment to visit a new place she was particularly curious about. Now, she was fine in her place and with both her old and new friends who sorrounded her.

It was like something was changing in her. She was not living with that feeling of dissatisfaction, but with a constant feeling of gratitude towards everything happened to her day by day. And this led Colette to live in harmony with herself, where once she was always looking for something (from the outside world) that could make her feel good (inside her inner world).

But what did exactly happen to Colette? What was so important to change her this way?

The trust she decided to put in that man, namely Rémy, had been paid back with a feeling of awareness. In other words, Colette understood she needed to trust people and that the way we relate to other people is extremely important.

She understood that smiling can give the chance to get a smile back.

And she also understood that the more she was positive towards events or circumstances in life (being it right or wrong, good or not, expected or not), the more life was going to make her feel new emotions which she felt grateful for.

Colette and Rémy kept on meeting each other after that night they spent together in Paris. Thanks to those meetings, they found out they had more things in common they would have thought.

When Colette learned that Rémy was an artist, she understood how he managed to draw a rose on a little piece of paper so quickly while she went to the toilet.

Rémy was always taking along a pad of paper and a pencil not to give his number to the foreigner turists (as you might think), but to draw small and quick sketches while waiting for the tram or while sitting at the Café on the corner of Boulevard Saint-Germain and Rue Guillaume Apollinaire.

Those sketches, as often happened, made him think about new paintings to exhibit during expositions, shows or events.

He claimed, and I absolutely agree with him, that drawing is 10 times more stimulating and less hypnotic than using the phone. To say nothing of the charm of an artist who’s drawing, rather than that of a normal smartphone user who’s typing a message. In fact, Rémy still had one of those old generation phones and it was more than enough to him.

Returning to Colette, who’s the protagonist of our story, there’s something else to say. After meeting Rémy, with whom she established a serious relationship which is continuing to this day, Colette thought she should have made some changes to her life.

She realised her job did not make her feel satisfied, so she quit it to find something more stimulating. It didn’t take long before she found a new one which matched with her renewed inner energy.

She managed to settle down in a company where she felt valued for her real skills and for her desire to give the world something good that only she could give.

That’s why, you must know, each of us has something to give that others do not have. That’s one of the secrets in life:

sharing what’s good in us with those people who are around us.

Colette felt like she was appreciated above all her expectations for what she was giving the company and for the quality of life she was promoting at the company itself. She was more than satisfied now and this, obviously, made her feel even happier than before.

However, what made her feel positively surprised was the fact that she was finally able to appreciate her life fully. She got her relationship with her dad (that was to be considered lost) back again, which was considered as a miracle for those who knew about their relationship.

She started to be on a diet which made her feel interested in her health and she learned about that kind of food that was the cause of her digestive complants. What she couldn’t believe in, though, was the fact that psoriasis on her skin was now gone.

She noticed that a healthy diet and a lifestyle which matched with her attitudes (just like the one she is now living), helped her in healing from psoriasis and from many stomach troubles she had since when she was a teenager and that she had never succeded in healing from by using medicines.

In this regard, I invite you to take a look to the following articles:

NOT ONLY RELATIONSHIPS, BUT ALSO THE ENVIRONMENT CAN AFFECT US

On completion of what I’ve said, then, we can say that:

/Having good friends, cultivating healthy relationships with your family, with your partner and in general with all those with whom we also deal with in the world of work, is certainly important for keeping us healthy./

Having bad friends, having to deal with depressed personalities or having to deal with people who are in a state of rage, who address other people with accusation, can lead our mood and health to negative frequencies at first which will make us become like those people (it’s better to know now, believe me!).

So, before letting the cripple teach how to limp, evaluate your friends and be ready to get distant from those who drain your energies just like ‘energy vampires’ do.

It does not means you’re selfish, but it means you have a healthy self-respect and you protect yourself from those who live by vibrating at very different frequencies than yours.

Understood this, it is equally important to know that the sorrounding environment affects us as well.

Working in contact with an environment which positively stimulate us is fundamental for our health status.

So if you love the park, try bringing your laptop there, sit on the grass and work just like you were home or at the office. In other words, be at ease. The same thing should happen if you love the mountain or the sea or the city library. What matters is that you can choose your perfect place, namely that place where you feel more inspired.